The Danish architect firm has won their first project in Belgium, and the Key West urban development project in the Brussels Canal Zone will bring Scandinavian socio-economic cohesion to a challenged area – transforming Brussels with rooftop farming and canal life.

As many other European cities, Brussels has shifted away from heavy industry to a postindustrial economy and is now in the process of redeveloping old industrial areas shifting its city center towards the Canal Zone. The Canal Plan initiated by the Government of Brussels is the biggest urban development in the Brussels Region. The Key West development will serve to tie Anderlecht and the city west of the canal closer to central Brussels while bringing spatial and social cohesion to a challenged area.

Henning Larsen Architects develop Key West together with Belgian Architects A2RC. The regeneration plan balances urban and recreational life along the canal containing a rich mix of 46.000 m for housing, and 17.000 m² for a mix of school and further training, sports- and production facilities alongside urban farming and generous public spaces.

- We were inspired by the Government of Brussels’ ambitions to tap into the spirit of the old industrial area by introducing ‘second generation industries’ ─ local production facilities such as e.g. microbreweries, a cookie factory, coffee roasting facilities. As architects involved in urban planning one of our most distinguished tasks is to create the physical framework for an area like Key West to regain economic growth and community cohesion, says Partner at Henning Larsen, Jacob Kurek. 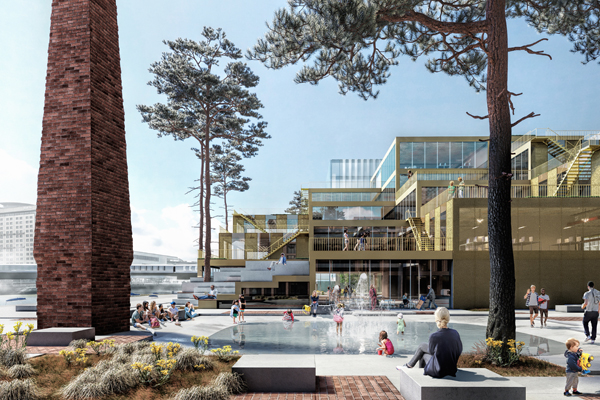 For the Key West development, the goal is to extend the existing canal system interlacing the plot with a new basin thereby making urban waterfront living accessible to more people. By applying both rainwater collection and strengthening the local biotope in the basin ─ the water quality for the entire adjacent canal system is heightened. This approach also makes it attractive to use the waterfront for community strengthening activities such as kayaking or social events.

- From Copenhagen Harbor, we know how waterfronts are very powerful attractors when it comes to creating public life in a city. It gives an immense quality of life to feel a connection to nature in a city center. When you give people attractive places to meet a sense community is naturally strengthened, Jacob Kurek, Partner at Henning Larsen says.

Throughout Key West, the ground floor is activated by public functions and retail, designed to create life at street level. As one strolls through Key West, the inner courtyards and urban farming on roofs will appear as small secret gardens for relaxation overlooking both the city and canals. A large south facing town square by the main canal will serve as a natural public gathering point. It is connected to a Market Hall designed as a flexible space with moveable glass facades. The town square will become an attractive space for local events, flea markets as well as selling local produce from the Key West rooftop farms ─ tying a holistic loop from earth to table.

The residential part of Key West is located above the public functions designed in a variety of heights, depths, and massing. In this way we are able to offer a rich variety of studios and 1-3 room apartments as well as introducing a new typology to the area; co-housing ─ large 8-9 bedroom apartments for shared living.

Key West is developed for client BPI in collaboration with Architects A2RC. The project is expected to be completed by the end of 2022. 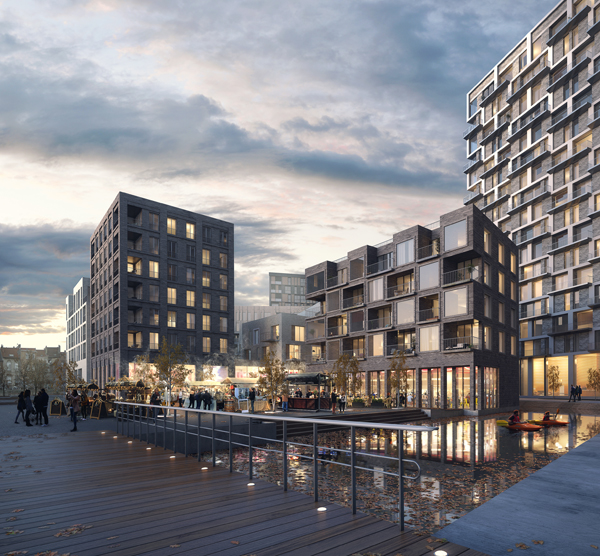