A journey started 10 years ago: Pedrali celebrates a double anniversary 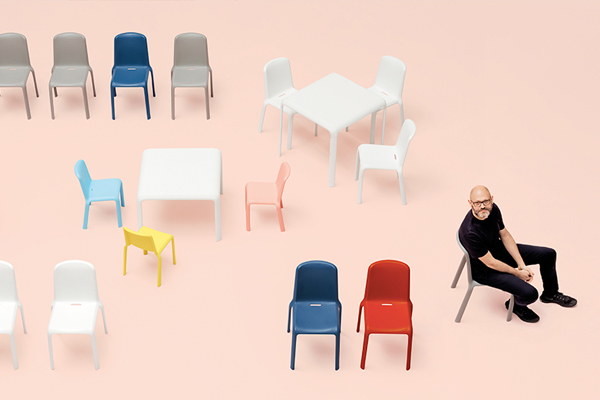 For Pedrali the year 2018 marks the tenth year of collaboration with two well-known names in Italian and international design: Odo Fioravanti and Jorge Pensi.

Ten years ago, in 2008, Ypsilon was launched, the first iconic and timeless product designed by Jorge Pensi for Pedrali. This collection of tables is characterized by clean lines and light and refined shapes. The key to its success is also given by Ypsilon’s ability to be suitable for indoor and outdoor spaces. Made of aluminium, this table is light and easy to handle, leaning gently on the floor, almost floating in the surrounding space. For Pedrali, Jorge Pensi has also designed Ara, the collection of polypropylene seatings with a distinctive character and, the multiple seating Plural, designed for a multifunctional and changing world.

In 2008 Odo Fioravanti designed two chairs for Pedrali: Snow and Frida chairs which, over the years both products were a success with the public, and also received the recognition of the critics. At its debut at the Salone del Mobile, Snow won the first prize of Young&Design. To celebrate Snow's tenth anniversary, Odo Fioravanti has designed four special versions of the chair, connecting them with music tracks that accompanied its history, with an installation entitled “Let it SNOW: ten years together”. First launched in 2008 at the 32nd Promosedia, Frida won the Top Chair Residential award in 2008. In 2011, Frida won the XXII ADI Compasso d’Oro ADI, the oldest and most influential international design award, for its "simple sculptural beauty". Frida explored new possibilities in the field of woodworking. Its most extraordinary feature is the superposition of a three-dimensional shell on a solid wood frame. The result is a sturdy yet extremely cosy chair characterized by lightness and resistance.

Odo Fioravanti and Jorge Pensi were the key players of the “Talking about Design”, the speech about the design of yesterday, today and tomorrow, which was held on September 13th, 2018 at the Pedrali Headquarter orchestrated by Luca Molinari as moderator. The partnership started ten years ago reflects the combination of the creative expression of the designers and the know-how of the Italian company.

- I think there is something deeply honest in the fact that objects do their job, which is to enter people’s lives gracefully, gently and then somehow take different meanings day to day. In Pedrali I have found the technology and a sense of community, explains Odo Fioravanti. For Jorge it is important that the goal is to create objects with a timeless design.

- I am very happy to work with Pedrali. We share the same values. Quality represents a key-point for both of us. I have always admired Italian design and being able to be part of it is an honor for me, states Jorge Pensi.

There are several projects where those products are used. Frida has become part of the furnishings of the Olivo restaurant in London, designed by the architect Pierluigi Piu. The interiors of this location are marked by soft and evocative lights able to create a comfortable and intimate atmosphere. Snow chair, a new classic with playful shapes suitable for different contexts, was chosen for the interiors of the Luigi Bocconi University in Milan.

Ypsilon tables, lightweight and at the same time resistant, have been included in the café of the Labirinto della Masone in Fontanellato, the largest garden labyrinth in existence in the world, designed by Franco Maria Ricci. The tables have also been used at the Google Campus in Dublin and the Moleskine Café, in the heart of the Brera design district in Milan.

Jorge Pensi was born in Buenos Aires in 1946 and has studied architecture in his home city. He left Argentina in 1975, dreaming of new horizons and challenges. After crossing the ocean, he settled in Barcelona and became a Spanish citizen. In1984 he set up his own studio in Barcelona's Gothic quarter. The designer believes that part of his professional success is due to the intimate, close and warm relationship he has with his team and his clients, allowing shared project development with optimum results. Jorge Pensi has been awarded numerous prizes and has received widespread recognition throughout his career, including the Spanish National Design Prize in 1997, awarded by the Ministry of Industry and Energy for his outstanding professional achievements.

Odo Fioravanti studied Industrial Design at the Design Department of the Milan Polytechnic. Since 2003 he has been working as an industrial designer, also experimenting graphic and exhibition design. His projects received prestigious design awards and he held lectures in many design schools and academy. For Pedrali, among other products, Odo is the designer behind the Babila chair collection, that is a cross between tradition and innovation. He has also designed the Dome, a chair that is inspired by the interior of the bistros in the chic and trendy cities.

Pedrali is an Italian company producing contemporary furniture for public spaces, offices and homes. The collection is the result of a careful and accurate research aimed to create industrial design products with original shapes and are made of plastic materials, metal, wood as well as upholstered. These chairs, tables, complements and lighting are exclusively manufactured in Italy at the company production sites through a design process which combines tradition and innovation, engineering excellence and creative brilliance. The “100% Made in Italy” philosophy becomes real through the internal production in Manzano (Udine) and in Mornico al Serio (Bergamo) where they based the new automated warehouse designed by architect Cino Zucchi. The experimentation of production technologies, the use of different materials and the cooperation with many designers have allowed Pedrali to achieve important awards such as the Compasso d'Oro ADI for the Frida chair.