Can Norway win the global race to build a 'floating tunnel'?

With majestic glaciers, fjords and mountains, Norway is famous for its dramatic natural landscape.

Its rugged terrain does not make traveling easy, however. More than 1,000 fjords line the Scandinavian country's west coast, which is home to a third of the country's  population of 5.3 million. To make the 1,100 kilometer journey between the southern city of Kristiansand and Trondheim in the north via the west coast, for example, currently takes 21 hours, and requires seven ferry crossings.
The Norwegian government plans to cut that time by half with a groundbreaking $40 billion infrastructure project to make the route "ferry-free."
The plan includes bridges and the world's deepest and longest rock tunnel -- drilled through bedrock under the seabed -- measuring 392 meters (1,286 feet) deep and 27 kilometers (17 miles) long.
But the most ambitious aspect is the development of submerged floating tunnels that sit around 30 meters (100 feet) under the surface of the water.
If successful, Norway could win a global race against countries including China, South Korea and Italy, which are  researching similar projects.
The Norwegian Public Roads Administration (NPRA), the governmental body responsible for the project, aims to complete construction by 2050.

Why build a floating tunnel?

The journey between Kristiansand and Trondheim is part of the E39, which is a "key route for Norway," explains Kjersti Kvalheim Dunham, a project manager at NPRA.
A combination of motorways, roads and ferry rides, E39 runs along the southwestern  Norwegian coast. More than 50% of export goods in Norway originate from this area, she adds -- yet the route "has a very low standard for a European road." Crossing the fjords via ferry, while a  popular transport method, can be time-consuming.
The government intends to improve transport "for commercial purposes (and) also for the welfare of the local population," Dunham says.
Three suspension bridges and five floating bridges will be built. Floating bridges -- structures that are supported by pontoons -- have been built in Norway and the US, among other countries.
When a fjord is  deeper than 1 kilometer (0.6 miles) or wider than 5 kilometers (3 miles), however, existing engineering solutions  are not going to cut it. Theseabed would be too deep to be drilled through for a rock tunnel or for a suspension bridge's foundations to be laid.
Floating bridges do not work in all cases because they are susceptible to harsh weather conditions such as strong waves and currents.
This is where the floating tunnels come in.

The anatomy of a floating tunnel

The idea for a submerged floating tunnel is not new.  In 1882, British naval architect Edward Reed  proposed a floating tunnel across the English Channel -- an idea that was vetoed.
The term "floating" is perhaps misleading. The tunnels are fixed in position with cables -- either anchored to the seabed or tethered to pontoons which are spaced far enough apart to allow boats to pass through. Made of concrete, they would function like conventional tunnels, transporting vehicles from one end of a fjord to another.
Waves and currents at 100 feet below sea level are less powerful than those at the surface, explains NPRA's chief engineer Arianna Minoretti.
In addition, a floating tunnel minimizes the impact on the landscape since most of the infrastructure is out of sight. It also creates less noise than traffic on a bridge would. "That would be an advantage ... (for) people living in the area," Minoretti says. 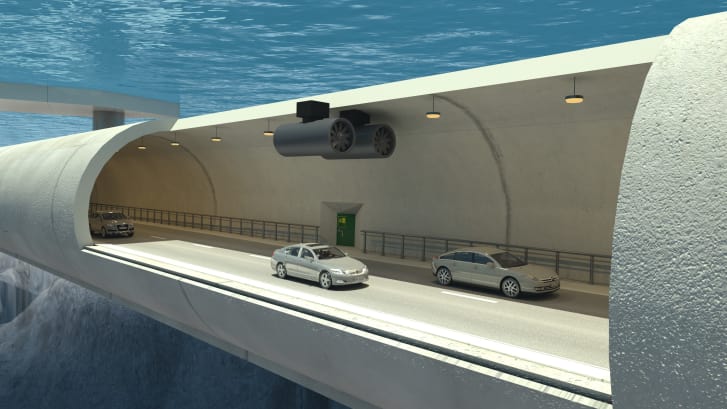 The biggest risks in the project are explosions, fire and overloading, says Minoretti -- and so extensive testing is essential.
NPRA is working with the Norwegian University of Science and Technology's Center for Advanced Structural Analysis (CASA), using live explosives to "investigate how tubular concrete structures behave when subjected to internal blast loads," says CASA researcher Martin Kristoffersen.
The tests will help the team to understand what would happen to the tunnel's structure if, for example, a truck carrying dangerous goods exploded inside.
Results so far indicate that the constant water pressure that surrounds the floating tunnels reduces the damage caused by explosions.
Working with the Norwegian navy, the NPRA team is also investigating how the tunnels would fare if submarines crashed into them.
While locations for the submerged floating tunnels have not yet been pinned down, Minoretti says the  project  will be completed in just over 30 years' time.
The improved E39 will open up more of the west coast to tourism, while the tunnels may become attractions in their own right -- especially if they are a world first.
"As a bridge engineer working on this amazing project," says Minoretti, "one can only hope."