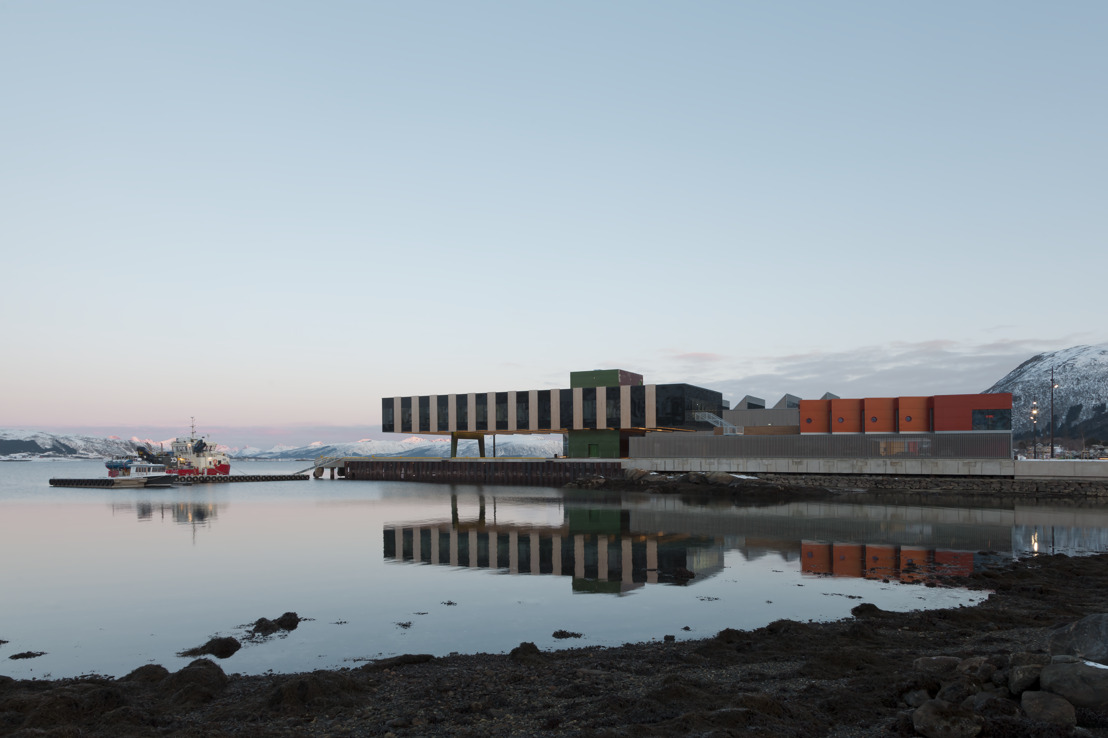 On behalf of shipowner Holmøy Maritime, Snøhetta has designed Holmen Industrial Area, a highly sophisticated and colorful 6,000 square meter fishing facility situated on the eastern side of Sortlandssundet in the archipelago of Vesterålen in Northern Norway. By assembling all employees and top-notch facilities on the same site, this bold new facility ensures the regions continued international success within Norway’s second largest industry – an industry worth over one billion dollars annually.

Monday, November 12, 2018 — The new facility intelligently blurs the distinction between the rawness of the fishing industry with a more polished corporate allure by subtly merging Holmøy Maritime’s trawling, fish farming and fish processing business and the company’s headquarters into four, distinctive buildings. The buildings also include a guest house that functions as a home away from home for employees that need to rest their eyes between shifts at sea or on land.

Oriented toward a first-class 126-meter-wide deep-water harbor plunging into the Norwegian Sea, the buildings are all organized and dimensioned to facilitate for activities at sea and on the mainland while also safeguarding and respecting the surrounding pristine North Norwegian landscape.

With its typical coastal climate, mild winters and cool summers, the islands of Vesterålen is home to a little over 32 000 inhabitants. The area has been a beacon of the Norwegian fishing industry for almost 1,000 years, and the region is famous for its highly nutritious ocean currents and its booming fauna and flora boosted by the Gulfstream which runs closer to the coastline here than anywhere else in the world. Nature in the area is characterized by the rough ocean, sheer mountains and rainy skies that tend to hide the endless midnight sun in summertime. From December to the beginning of January, Vesterålen is plunged in a distinctive blue darkness, only to be lit by occasional northern lights.

The Holmen Industrial Area carefully considers its context by creating a simple, yet logistically complex industrial typology that treads lightly in the landscape. The colorful facility is inspired by the changing light conditions and spectacular landscape of Vesterålen and is organized in a simple rectangular shape that carefully camouflages in- and outgoing traffic from boats and trucks that shuttle between the facility, the sea and the mainland. By creating an open space with large windows, the facility allows for a maximum of daylight to penetrate the building while also providing beautiful views overlooking the sea. The design also reduces the need for artificial lighting and heating, contributing to a better indoor climate and a more sustainable building.

Surplus excavations from the building site are transferred back to the surrounding nature through the creation of a gently undulating landscape. Following a green alley that runs along the guest house and headquarters, the landscape ends up as a small park area dubbed “Lunden”, a recreational free-zone for employees and visitors. Grass, local vegetation and birch trees safeguard and emphasize the aesthetic of the surrounding landscape.

Snøhetta has conducted an extensive mapping of the complex logistics required to ensure that the quality of the fish meets the highest standards before being exported to the millions of people around the globe that consume Norwegian fish every day. The fish trawlers trajectory to and from the facility, equipment storage and employee needs, and the meticulously process of handling fish from the time it leaves the net pens until it is frozen and shipped, have all been considered carefully throughout the design phase to achieve the best environment possible for employees and for production. The freezing terminal functions as the very heart of the facility and there are plans for extended freezing and storage facilities as well as a 112-meter extension of the deep-water harbor.

Functional materials such as an aluminum façade cladding and concrete floors have been chosen for their aesthetic and durability, and create a contrast to the colorful details of the facility. Warm colors ranging from red, subdued orange, yellow and green create a playful contrast to the sky, ocean and mountains of Vesterålen and distinguish themselves to the otherwise subdued metallic grey color and materiality of the facility and subtle wayfinding elements both on the inside and outside of the facility.

The bright color palette is also translated into the interior design – from the construction itself to interior elements. The colors create a warm atmosphere contrasting with the light ash and birch woodwork of the ceiling battens, wall panels, flooring and fixed and loose furnishings, adding a touch of playfulness to the breathtaking views of the shifting and dramatic scenery outside. A rich, colorful graphic profile with a characteristic marine pattern inspired by fish scales adorn the windows and sides of the freezing terminal and the Holmen Industrial Area's new logo. The graphic profile is also translated into the silver pattern of business cards and stationery, creating a beautiful aesthetic addition to the overall storytelling of Holmøy Maritime - a story told through architecture, landscape architecture, interior architecture and graphic design.